What are Performance Enhancing Drugs

While a number of substances have been viewed as “performance-enhancing”, generally, when people speak today of these substances they are talking about two different classes of compounds, anabolic androgenic steroids or human growth hormone (hGH). Anabolic steroids are synthetic compounds that are based chemically upon the structure and biologically on the effects of the male sex hormone testosterone. hGH is a synthetically produced version of the same growth hormone that is produced in all of our pituitary glands, the so-called “master gland”, that is located just at the base of our brains.

How do These Drugs Work

One of the major functions of naturally produced growth hormone is the stimulation of growth of cells and tissues. Growth hormone can do this directly or by acting through the effects of other hormones that it regulates. In normal physiological terms, growth hormone functions to regulate longitudinal growth or stature, i.e. you grow taller. GH also contributes to lean body mass, enhancing fat burning while increasing muscle. Testosterone controls the onset of puberty in boys and the development of male secondary sexual characteristics like deeper voices, facial hair growth, lean muscle mass, and other features.

Are These Drugs Ever Useful

Used appropriately in a supervised setting most of these compounds serve specific medical needs. Children and adults who have a condition where they have a deficiency of growth hormone production can benefit from the monitored use of growth hormone injections. Likewise, the controlled use of anabolic steroids can help in medical conditions where there is muscle wasting or an unusual delay in, or absence of, puberty.

Are These Drugs Really Harmful

If abused, these drugs are harmful. Studies have shown that the misuse of anabolic androgenic steroids (AAS) leads to, amongst other things, negative changes in the heart muscle and its function as well as liver toxicity. It also leads to a decrease in serum values of the good cholesterol (HDL) as well as negative changes in other blood chemistry values. The use of growth hormone in excess can lead to several serious conditions including an abnormal tissue growth pattern referred to as acromegaly. In this condition, in addition to other problems, the eyebrow ridge and the nose grow disproportionately, as do the hands and feet. Misuse of hGH has also been associated with the development of diabetes as well as other conditions.

If these drugs are the same as, or very similar to, compounds already in our bodies how can they be harmful? First, no one has performed a large, controlled study of the long term effectsand total number of side effects of steroid or hGH abuse. Of course, at the dosages used or the length of time of use that is typically expected by abusers who are “juicing”, it would probably be difficult to get enough volunteers to participate. Second, these compounds were developed, for the most part, for specific medical reasons as treatments for individual disorders. It is unlikely that they would remain beneficial with inappropriate overusage. Besides, it seems reasonable to assume that if you routinely inject something into your buttocks or thigh that someone else carried into the local gym in their duffel bag there is a likelihood that the downside will greatly outweigh the imagined upside.

With the passing of the new year my attention turned to what I want to achieve in the next twelve months.  Yet again I find myself resolving to go to the gym more often, and when there, work harder for longer.

What is it I want to achieve while I’m there?  Well for me the most important reason for working out is that it improves my mental health: a good workout gives me a sense of achievement, purifies my body of stress toxins, and releases the ‘happy’ chemicals, endorphins, that lift my mood.  Then there is looking more attractive: as I am getting older, or so I reason, my body is one area that I still have some control over.  Alarmingly, making an improvement in my physical health comes a poor third in my list of priorities. 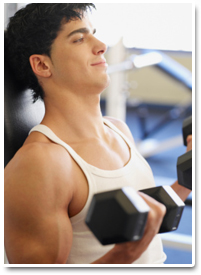 I suspect it’s the same for a lot of men.  What is interesting is the increasing pressure men face to ‘own’ the beautiful body.  We can’t do much about our faces, but we can change our physique, right?  But which physique?  For many years the fit and toned look epitomised by David Beckham was the gold standard of male physical beauty.  But ever since Daniel Craig emerged from the sea in Casino Royale in 2006 there has been something of a shift to a more rugged muscular build.  The pressure is on to not only slim down to a percentage body fat that reveals a washboard stomach, but also pile on the muscle to create that more angular ‘masculine’ silhouette.

What are these pressures doing to men?  Well for many men it is simply no longer acceptable to abuse your body and accept the middle age spread as an inevitable consequence of growing older, just like a receding hairline.  In some ways this is a good thing.  Bodies that are worked out, generally speaking, are healthier than those that never see the inside of a gym.

For some men, though, this has simple gone too far.  The eating disorders of anorexia and bulimia, once diseases mainly restricted to women, are becoming increasingly prevalent in men, particularly young men.  This is understandable when you realise you need a percentage body fat below 14 to reveal your abs (however big they are), and that maintaining this level of body fat is both difficult and unhealthy.

To these can be added a related, but peculiarly male disorder: bigorexia.  There have been many attempts to define this condition, and they tend to come under guises such as ‘exercise addiction’ or, more formally, ‘muscle dysmorphia’, but they all capture one essential feature: the man is unhappy with how muscular he looks and, however big he builds up his muscles, he still feels that he is too small.  Even if the man is asked to compare himself with another man of similar physique, he still sees himself as being smaller.

Bigorexia, in this sense, is closely linked to anorexia and bulimia, in that all three stem from a problem with the way the person perceives their body.  Just as anorexia and bulimia leads to secondary problems, such as the use of laxatives or throat and teeth damage, men with bigorexia, can also develop a dependence on anabolic steroids – or ‘roids’.

Roids are freely available in most gyms around the country, and hold the advantage that they can make you bulk up on muscle really quickly.  You still have to put the hours in at the gym, but you get better results from the time you spend.

Sound ideal?  Well consider the side effects of roids.  First there are the risks of psychological dependence and the kind of physique they produce.  Second is the disturbance in mood that roid use can bring about, particular making men more irritable and aggressive (hence the expression ‘roid rage’).

The dangers are not just psychological, but physical.  Many men develop acne on their face and back.  Roids can also stimulate the latent breast tissue in men causing what is sometimes referred to as ‘bitch tits’.  The long term damage can also be severe, causing serious hormone regulation problems.  If you use needles to inject the roids (which is not uncommon), there are also the risks of infection including hepatitis and, if needles are shared, HIV.

For guys with bigorexia though, these dangers are worth the price.  In fact this is the real danger of bigorexia, the men who have it don’t identify as having a problem.  For them, getting bigger becomes an all consuming passion, even an obsession, and they can’t see that they are doing themselves harm, and certainly wouldn’t consider getting help.

So where is the dividing line between wanting to shape up and look fit, and exercising to the point you are doing yourself psychological and physical harm?  Well for me the real point of danger is if you consider using roids to boost your muscle bulk.  If you need to change your body shape so badly, there is a potential problem.

For many men concern over their physical appearance is just one of the ways they experience low self worth.  It’s not just men with bigorexia who are unhappy about their shape.  Inevitably as men’s bodies continue to be object of fashion and used to boost commercial products from films to talcum powder, such low self esteem is set to continue to grow.

What can be done about it?  The good news is that if you are continually obsessing about your body shape there are things that can be done.  Learning to identify and change your style of thinking is central to therapy in this area and, provided you can accept you have a problem, is highly effective.  The trick is to catch it early.  If you leave it until you have full on bigorexia, you have probably left it far too late.