If The Gay Scene Is The Answer, What Is The Question?

This weekend hundreds of thousands of gay men from around the country and abroad are descending on Manchester to celebrate gay Pride.  These showcase events celebrate the diversity of gay culture, and offer an opportunity for men of all ages to stand together – out and proud.  But such festivals of gay culture hide some very disturbing truths. 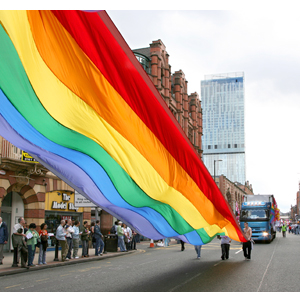 I guess the first thing to clear away is the psychological baggage some gay men bring to the gay scene.  Let’s face it; accepting that you are gay is tough.  Ever since you were a kid you picked up social messages that being gay was wrong or weird or antisocial.  Sometimes those messages were literally hammered home in the form of physical attack.  Sometimes in the street, and sadly, sometimes from brothers and fathers too.

So gay men bring a stock of self hatred to the gay scene.  Of course we see what we expect to find.  Our eyes seek out the stereotypes we were led to believe existed and our mind gravitates on them, often with aversion.  This is a process psychologist’s call projective identification.  We see those aspects we dislike in ourselves in other people, and then hate them for it.  Another name for it is internalised homophobia.

Many of my gay clients struggle with this internalised homophobia.  They go onto the gay scene, unaware and unprepared for what it has to offer, then recoil in dismay at what they find.  If we can clear our minds of such notions, what is really there in the gay scene?

Well I think a lot of what happens on the gay scene reflects not on gay men, but on the fact gay men are men.

As boys develop into young men testosterone again begins to shape their brains and they start to become interested not only in sex, but pecking order.  It’s just as important to boys and young men to know where they stand in the pecking order of life as it is for girls to connect and make friends.

Inhibited by a brain not wired for ‘community’, and testosterone fuelling the brain with action and sex, young gay men are thrust into a testosterone rich environment which prises, above all else, sexual beauty and the pecking order it creates.  As men’s brains are also driven by the automatic need to seek out beauty, the young and the gorgeous rise to the top, and everybody else falls in behind – which of course, is virtually everybody.

It wasn’t always like this.  In the 80’s and 90’s gay men had a cause to fight.  With regressive laws like the infamous Section 28, which banned the ‘promotion’ of homosexuality, and the AIDS pandemic killing young gay men by the thousand, there was much to get angry about.  Gay men petitioned, protested and confronted the establishment to end their oppressive law making and provide the services to help gay men die with dignity.

Things are different now.  With antidiscrimination legislation protecting gay men’s working, and let’s face it, shopping rights, we now live in a different era.  With civil partnerships, gay men can now pay taxes on an equal footing with their straight counterparts.  The pressure now is to normalise and assimilate gay men to a straight moral order.

So this leads me to ask a different question.  If the gay scene is to be more than simply establishing a pecking order based on youth and beauty, and the opportunity for young men to feed their testosterone driven sexual appetites, what does it need to be?

Well in my work with gay men, I see the social isolation, alienation, and drink and alcohol problems fueled by the commercial gay scene.  The gay scene might be in full on party mode, but the male brain isn’t making the connections it needs to sustain and nurture lives, old and young.  Gay men need community, not more drinking opportunities, and I see very little by way of community action bringing it about.

The commercial gay scene may be an answer to one question … but perhaps it’s not the right question to be asking.

Homosexuality Can’t Be ‘Cured’ – But Can We Accept It?

Over the last 200 years or so, there has been ongoing debate about the relative role of psychology and biology in a range of human behaviours.  Autism and homosexuality are two good examples that research has placed firmly on the side of biology.  For many years professionals tried talking therapies to help people with autism and homosexuality overcome their ‘afflictions’.  In both cases all they served to do was increase the distress of the patient, and their families, by making them feel responsible for their behaviour.

With respect to homosexuality, the psychiatric profession for many years held it to be an illness.  This is no longer the case.  Although the causes of homosexuality are still debated in nuance, there is increasing consensus that it is biology that determines a person’s sexuality, not psychology, upbringing or indeed, personal choice.  Interestingly there are different biological reasons for male homosexuality and female homosexuality, rather than a unified reason that accounts for both.

Furthermore, a survey of all published research about therapies that have tried to change a person’s sexuality has shown that it has always failed to do so, and often causes harm.  This has recently led to the American Psychological Society issuing a declaration that therapy to change a person’s sexuality does not work, with the implication that it is unethical to try to do so.  Pressure is being put on the British Psychological Society and the Royal College of Psychiatry to issue a similar statement.

Given this backdrop it is alarming that a recent study in MBC Psychiatry found that as many as 1 in 6 therapists have attempted to change at least one person’s sexual orientation  in their professional career.  On the face of it this seems to go against the evidence.  I wonder, though, if something more subtle is going on – namely a difficulty knowing how to deal with gay clients who are unhappy about their sexuality.

In the life history of most gay men there is likely to be a period when they couldn’t accept their sexuality, and therefore really didn’t want to be gay.  The pressures of family and society to conform to a heterosexual norm seem insurmountable for many men.  It is clear that many gay clients have a lot of soul searching to do before they form an acceptance of their sexuality.  Indeed, it could be argued that many gay men, though superficially accepting and adopting a gay lifestyle, still suffer from a hangover of ‘internalised homophobia’ that continues to impact on their emotional wellbeing and ability to form meaningful relationships.

Given the very real unhappiness that finding oneself gay can bring to a person, it seems understandable, if ill advised, to try and help the person to lead a straight lifestyle.  I suspect this, rather than a real belief in its possibility, that has led so many of my colleagues to try and change a persons sexuality.

It is within this backdrop, however, that the real danger to gay men’s well-being lies – namely in those religious organisations that still offer ‘treatments’ for homosexuality. Against the grain of science but in the name of God, such organisations can only serve to enhance gay men’s unhappiness with their sexuality, and not in fact offer any real solution to it.  At best all they can hope to achieve is an asexual life where sex and relationships are sacrificed for a supposed ‘greater’ ideal of ‘what God wants’.  I can’t see this being beneficial to the individual, or, indeed, society.

Homosexuality will continue to be a contentious issue, not least because it raises tensions between individual behaviour and social and religious mores. All I can do as a therapist is help everybody, gay or straight alike, to be more accepting of homosexuality.  It is in accepting others how they really are, that we are best able to learn to accept ourselves as we really are.  Psychological health, after all, starts by seeing the world as it really is, rather than how we think it should be.