We all know blokes are prone to putting on the pounds around our guts.  We know its not good for our health but mores the point we don’t like it, our partners don’t like it, and now there appears to be a way of getting rid of it that is painless, quick and doesn’t involve diets or exercise – sound too good to be true?  Read on … 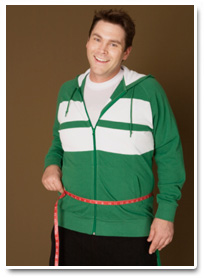 Lasers have been used in a wide range of medical procedures for years.  Rodrigo Neira, a plastic surgeon, noticed in 2001, that if he shone a laser at a culture of fat cells, the laser emulsified the tissue.  He reported his findings to the second South American Congress on Plastic and reconstructive surgery.

Later he showed that shining the laser onto fat tissue made fat tissue easier to remove by liposuction.  These findings were reported in the Aesthetic Surgery Journal (Vol. 22, p. 451).

The next step was to see if lasered fat cells would cause a loss of weight without liposuction.  The results were promising and reported in the journal Lasers in Surgery and Medicine (Vol. 41, p. 799).  The average lasered person lost 3.51 inches of girth.

The lasers seem to cause holes to form in the fat cell membranes. This allows the fat into the intercellular spaces.  It is then claimed that this fat is then harmlessly cleared by the body.

Although this technology is still relatively new and unproven by medical standards, it is now available.  It is not cheap though, a 20 minute laser consultation costs approximately £250 … but the provider Harley Fit claim you can loose up to seven inches in one treatment.

From my perspective, I am convinced the lasers do emulsify the fat which then passes through the body naturally.  The problem is that it may not destroy the fat cells themselves.

Fat cells work like a ratchet system; our bodies can produce new ones, but not destroy old ones.  This system will suffer from the Achilles heel of all fat reduction systems; it will trick the body into believing it is in starvation mode, and the fat may just pile back on.

If the results justify the hype, this truly is a remarkable breakthrough.  To hold on to your gains though, you are will still have to address your eating and exercising habits.

How To Get Best Results From Clenbuterol?